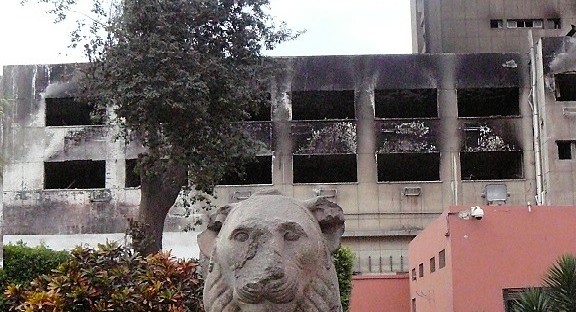 January, 25 is the anniversary of the Egyptian revolution of 2011, which had a profound impact on many parts of the world. This article explores my own journey to Egypt, highlighting the interplay between activism, radical politics, and spirituality.

Life is full of contradictions, isn’t it? Yet sometimes these contradictions provide the most fertile ground for growth. I live in Greece, a country that has powerful Goddess traditions, yet Goddess spirituality here is hard to find. Even the feminist movement has been virtually non-existent for long and only in recent years it has been rising from its ashes.

For a long time, I’ve been facing a challenge how could I be a Goddess activist in a part of the world without any Goddess activism I had no other choice but to turn to the movements unfolding right before my eyes. “Walking the talk” has taken a very literal meaning for me. I’ve marched countless miles protesting against wars, austerity measures, racism, fascism, homophobia, transphobia, etc.

My activist work has taken me beyond Greek borders at times. Surprising as it may sound, my most profound experiences were connected not to Greece but to Egypt. These two countries may seem very different at first glance, yet they’re close in many ways. They share the same sea, the Mediterranean, which facilitates the contact between diverse peoples and cultures.

Over the centuries, Greece and Egypt became a part of the same empires. They were conquered by Alexander the Great at first and later on were taken over by the Romans, the Byzantines, and the Ottomans. Greeks flourished in Egypt in the 19th and 20th centuries. Nowadays, there’s a Hellenic minority living there while an Egyptian one has settled in Greece.

My personal connection to Kemet, the “Black Land,” as her ancient inhabitants used to call Egypt, goes way back in the past. My first visit there—a profoundly spiritual experience—was in my early twenties. This mysterious country became ever-present in my thoughts from the time of the revolution in January 2011. By a strange coincidence (or maybe I should say synchronicity), a gift arrived at my hands those very days: Horus, the falcon-headed son of Isis (or Aset, as they called her in times past), a replica of an ancient figurine brought to me by an Egyptian friend.

Who would have thought that my life would change that day? Maybe it was the magic of Isis or the awe-inspiring beauty of the “Black Land.” Perhaps it was the earth-shaking energy of the Revolution or all of these combined. As a result of the strange events happening those days, I set out on a quest. I was struggling with a huge workload at the time, yet I closely followed Egyptian politics while also reading about ancient myths and rituals. I remember myself lying in a hospital bed—I had just woken up after an operation. The first thing I did was to open Plutarch’s Isis and Osiris, a rich source on Egyptian Mysteries through the eyes of a Greek who lived in Roman times.

Plutarch wrote that Isis embodied the fertile parts of Egypt while her sister, Nephthys, represented its barren places.[1] Isis and Egypt became one in my mind, personifying the archetypal Divine Mother. The myth about Isis discovering Osiris’ scattered members felt alarming real. Parts of myself were missing and I had to go to the ancient land of Kemet to search for them.

My Journey to Revolutionary Egypt

Much as my friends were trying to dissuade me from visiting a country in revolutionary turmoil, I decided to travel to Egypt again, hoping to find an answer to the riddles in my mind. It was November of 2011. The country was ruled by SCAF, the military council that had taken over after the dictator Hosni Mubarak had been ousted. The spirit of the revolution was alive and well, so once again the people of Egypt organized massive mobilizations.

I was aware of the dangers in protesting in Egypt. For months I had been in touch with activists and had read lots of horror stories. Questions were pounding on my mind. What if the demonstration was attacked by security forces, armed thugs, and snipers, as had happened during the revolution What if I got arrested and ended up in one of the country’s notorious jails where political prisoners were routinely raped and tortured

But I couldn’t miss the opportunity to join the rally in Cairo, thus I decided to take the risk. So, there I was, in Tahrir, whose name means “Liberation,” the iconic square of the January revolution. I had been there just a few days earlier to visit the world-famous Museum of Cairo. That first visit was a pilgrimage to the treasures of the past that have kept me under their spell for so long. Isis and Osiris were there, staring at me with their inlaid eyes, holding the key to secret longings.

The second visit to Tahrir was a pilgrimage too but of a different nature. Demonstrating side by side with Egyptian revolutionaries felt like a dream come true. The place was overflowing with protesters, many of them women wearing the hijab, the Muslim scarf, on their heads. They were key figures, just like they had played a leading role during the January revolution.

The march was huge, just like the rallies organized in other parts of the country. It was reported that three million people demonstrated that day all over Egypt. The atmosphere was almost festive. Protesters seemed proud and strong. The energy of the revolution was palpable—and there’s nothing like a revolution if you want to raise energy!

Sameh Naguib, an Egyptian sociologist at the American University in Cairo, gives his own eyewitness account of what Tahrir was like during the days of January and February 2011:

Tahrir Square was turning into a massive commune of resistance and a “festival of the oppressed.” (…) An explosion of individual and group creativity was taking place. (…) The space in Tahrir was not simply occupied physically but spiritually. Harassment against women disappeared, tensions between Copts and Muslims evaporated. People shared food, water, cigarettes. Songs, music, poetry and chants filled the air. A new Egypt was being created.[2]

These memories were very much alive in November of the same year. Tahrir had become an archetypal symbol of solidarity, freedom and people power. But the joy of the November demonstration did not last for long. The next day, clashes started and went on and on, leaving dozens of people dead. More than forty Egyptians lost their lives. I froze in horror hearing piles were being made with the dead bodies near Tahrir. One of my close friends was wounded during those riots and ended up with a broken nose.

I had no choice but to leave Egypt at the time, but I vowed to come back. My presence there had no doubt been an initiation–an archetypal journey to the Underworld, a close encounter with the deities of death. Osiris, after all, is the King of the Underworld. The initiation process involves the death of the old self and the birth of the new one.

For me, activism has been an ongoing form of initiation. “We change ourselves by changing the world,” an activist friend told me about 15 years ago. Time and again his words turned out to be true. Activism can be a powerful force of transformation of both the inner and the outer worlds. In some cases, it involves confronting the possibility of death. Not only does this confrontation help us realize the value of being alive, it also reveals something we don’t normally see: in revolutionary times, people will often hold freedom dearer than life. Yes, revolutions sometimes turn ordinary people into heroes.

Being an activist sometimes poses pressing questions. It forces you to ask yourself how much you’re willing to risk and why. How far are you willing to go to see your dreams come true? What is the price you’re willing to pay? At times you even have to ask what is worth living for—or dying for.

These are existential questions, challenging us to go beyond our limited day-to-day living and gain a wider view of our purpose in life. They also force us to face what we’re most afraid of. It’s said that if you can overcome the fear of death, you can deal with any other fear. To this day, I consider my participation in the Tahrir demonstration as the bravest thing I’ve ever done. Whenever I’m struggling with tough situations, it gives me strength to remind myself of that choice.

Surprising as it may sound, the conscious choice of risking one’s life can be tremendously empowering. Would I have the courage to put my safety at stake in a foreign land if it weren’t for my Goddess spirituality background? Much as I loved the revolution, it was the archetypal energy of Isis and Egypt that had the most profound effect on me.

“So, whatever happened to the revolution?” you might ask. It was crushed by a counter-revolution, supported by the ruling classes of Egypt and Gulf countries such as Saudi Arabia—with some help from the West too. Nowadays there are all sorts of conspiracy theories trying to portray the Arab Spring as a scheme of powerful elites and secret services, as if the millions of people who took part in it were mere puppets with no will of their own. Not really surprising. Mainstream propaganda always tries to discredit the struggles and power of the people.

Yet the Arab Spring inspired activists all over the world. The thousands of people who flooded Tahrir Square and stood their ground despite brutal attacks filled our hearts with hope. In the USA, the Occupy movement was born in 2011. During the same year, the anti-austerity movement broke out in Spain and Greece, also known as the Indignants Movement or the Indignados.

Occupying public spaces became a powerful form of protest. It was people’s way of saying “we’re here, we want our voices  heard, we’re fed up with this system.” Issues such as direct democracy, social justice, and individual rights came to the foreground. Up to this day, the spirit of resistance has been alive and well both in Greece and in other parts of Europe.

Being an activist has helped see Goddess spirituality in a fresh light. I understand that this path cannot change the world, but it can offer a vision for the future based on the experience of the past. For a vast part of its existence, humanity lived in egalitarian societies that honored women, as well as the Earth Mother and her spirits. Tribes of hunter-gatherers that managed to survive until modern times are a testimony to this.

It may take a revolution to create an egalitarian world today, with true “power to the people” rather than fake democracy or autocratic regimes. But even a revolution won’t be enough unless we find ways to organize society in a different way, from below rather than from above.

Sounds utopian? Activism requires us to believe in our powers and transcend our limitations. It demands that we reclaim those parts of ourselves that have been cut off from us. Osiris was cut to pieces by his enemy, Seth. It was Isis that put his members back together. We need to do the same: re-member ourselves, re-member the revolution. 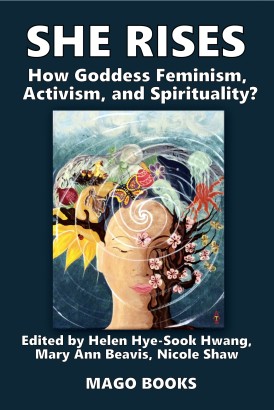 The article is an adapted excerpt of the essay “The Revolution Remembered: Activism as a Sacred Path,” published in the Mago Books anthology She Rises: How Goddess Feminism, Activism, and Spirituality Vol. 2, CreateSpace Independent Publishing Platform, 2016.

[1] Plutarch, Isis and Osiris 366, p. 93, 225-230. The whole text is available online in English translation by Frank Cole Babbitt as printed in pp 1‑191 of Vol. V of the Loeb Classical Library edition of the Moralia, 1936, http://penelope.uchicago.edu/Thayer/E/Roman/Texts/Plutarch/Moralia/Isis_and_Osiris*/home.html.

This site uses Akismet to reduce spam. Learn how your comment data is processed.

FIND US ON FB

FIND US ON FB